June 17, 2016 Deafexplorer Artists Comments Off on Interview with Billy Read 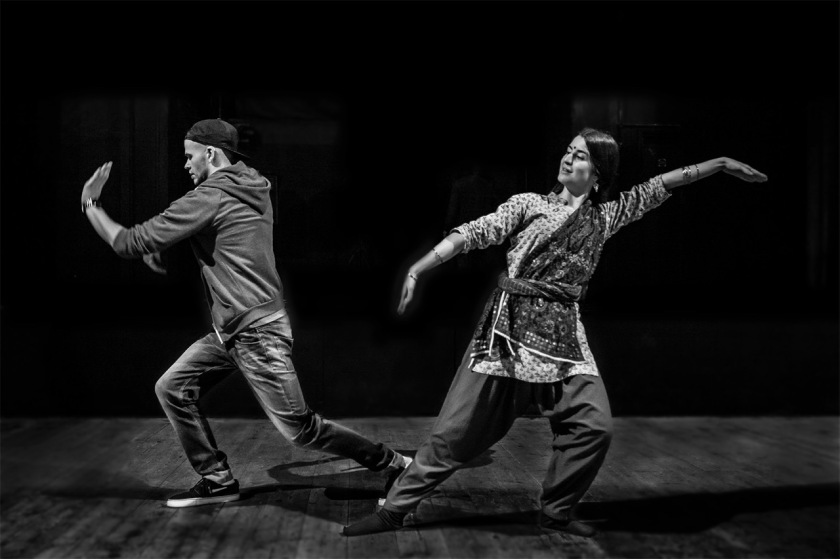 West Midlands based disability guru, Alan McLean interviews Deaf dancer Billy Read about his Arts Council funded collaboration with Italian dance artist, Giulia Marchetti who can see the drama in British Sign Language and has the skills to bind the language into dance.

Billy Read is a fresh new street dance artist and is profoundly Deaf. His work is informed and influenced by British Sign Language, Billy’s preferred method of communication. Giulia Marchetti is trained in Bharata Natyam Indian Classical Dance dance, which incorporates Mudra (hand/finger gestures) within the dance. The mudra are gestures that visually, rather than orally, convey events as well as inner feelings. Billy and Giulia met as artists working on ‘The Complete Freedom of Truth’ project in Srebrenica, Bosnia and Herzegovina, led by Opera Circus. Encouraged by Opera Circus, the two artists began a process of exploration and a sharing of their dance disciplines, to create a fusion of Bharata Natyam Indian Dance, Hip Hop and British Sign Language.

I asked Billy Read about his background in dance, “I am a street dancer inspired by the highly visual styles of Michael Jackson.  I’m a Michael Jackson Impersonator (because of being a huge fan) who followed and learnt about his dance moves. Michael Jackson was influenced by street dance, and he went on to influence modern street dance artists of today. Billy goes on to say that the attraction of street dance is that you don’t have to do formal training. He tell’s me, “There are no strict rules like there are in say Ballet, so everyone can dance and you find your own way, so for me as a deaf person wanting to dance; I was influenced by the music.”  Billy was twenty one when he started to dance, and its easy to see why he found street dance liberating. Defining the oppression that draws a deaf person to street dance is a little more difficult. Why are deaf people doing street dance more common than trained deaf dancers?  Billy has no difficulty in finding deaf dancers to dance with him in his company, “Def Motion”.  I ask him how does he dance without listening to music, “At school, I studied music and played in a band that depended on me for keeping the rhythm. They gave me the score for drums but I did not use it. I threw it away and I would memorise it instead. I have an audio memory and this way of working has stuck with me. It’s how I dance and choreograph”. I ask how do you collaborate with hearing dancers, “I love working with Giulia Marchetti, who is trained in a popular Indian classical dance style called Bharata Natyam  She has taught me and given me the strength and confidence to dance on my own. Bharata Natyam is a very visual style like street dance.

I ask how do the two of them collaborate? Billy says, “At first it was hard because Indian dance has a different structure, to collaborate we stick to a four-by-four time signature. The Mudra hand gestures and the use of hand gestures have greatly influenced and changed my dance style. Story and theme is now part of my performance style.” I am intrigued by this dramatic change in Billy’s dance style and ask him to explain more about what it feels like? “It’s new for me. It’s a risk to take on a different dance style. I am out of my comfort zone, when not dancing in a group. When working with Giulia I have to work 10 times harder. I dance differently now. It is about me dancing. I have to consider and deliver every detail.” Collaboration has clearly developed Billy Read as a dancer, taking him in a new and welcome direction. On stage he looks visibly more confident. Guilia Marchetti tells me by email that there is a different dancer inside from Summer 2015  to February 2016. I ask him how does this change happen? “I criticise myself a lot, when I think about the dance I have done I want do it differently, so I am really enjoying presenting “What the hell you talking about?” through out 2016.

For five days before the presentation of,  “What the Hell you talking about?” Billy and Guilia make a curtain raiser with young dancers dealing with the subject of oppression and social injustice.  I ask Billy about his participation work. He tells me that the feedback from young people has been terrific in terms of them saying the dance workshops are an opportunity to explore the inequality and injustice that prevails on the planet, with one person saying, “It was the first time I have thought about this, oppression  and democracy” He concludes that it’s important to challenge young people with an interest in dance, inspire them with new ideas and keep the workshops fun. I ask him how does he raise themes of injustice with young people. Billy says, “we use symbols and metaphors, like black tape over of our mouths, over our wrists and ask people to talk about the dance they have made… We pull out of a bag a banner. One word is censored, this makes the dancers think about censorship. On the banner it says they don’t care about us, they chose to black out don’t. With this phrase, it could be said that the metaphor and symbolism at play in the work of Billy Read and Giulia Marchetti is also about the systematic oppression and discrimination of deaf artists in the art world. “All art ultimately leads to revolution.”
It’s now time to care as Billy Read demonstrates with the right input and development Deaf dancers can excel.

‘This article, first published in Issue 4 of Participate newspaper, is reproduced by permission of People Dancing: Foundation for Community Dance. All Rights Reserved. See http://www.communitydance.org.uk for more information.’